Start a Wiki
Annie Hughes is the love interest of Dean McCoppin from the 1999 animated film, The Iron Giant.

She is also Hogarth Hughes's widowed mother and works as a waitress at a local diner. She first met Dean while Dean's asleep after Hogarth came to see her.

She gave a room for Kent Mansley while Kent is finding information about the Iron Giant. She first discovered the Iron Giant in Dean's junkyard and she and Dean begin to develop feelings for each other.

After the military discovers that the Giant is friendly and decided to stand down before Kent launches the missile, the Giant decides to sacrifice himself against the missile to save Hogarth, Dean, Annie, and Rockwell.

Towards the end of the film, she and Dean are shown to have become a couple, although it's never revealed if they're now married--if they aren't married, they're either engaged or, at the very least, boyfriend-and-girlfriend.

Annie was voiced by Jennifer Aniston. 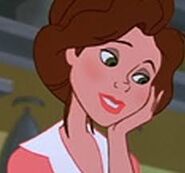 Annie smiling at Dean to return her feelings to him

Annie with Dean during the final scene

Add a photo to this gallery
Retrieved from "https://loveinterest.fandom.com/wiki/Annie_Hughes?oldid=67564"
Community content is available under CC-BY-SA unless otherwise noted.