Start a Wiki
Andrea Beaumont a.k.a. The Phantasm was the love interest of Bruce Wayne and ex-fiancée. She only came in Batman: Mask of the Phantasm and she wasn't seen or mention again in Batman: The Animated Series and The New Batman Adventures.

Andrea Beaumont is the daughter of wealthy businessman Carl Beaumont and his deceased wife, Victoria.

In her youth, while attending Gotham University, she meets Bruce Wayne. When Andrea meets him again at Bruce's house, she defeats him in a small sparring session.

Her victory over Bruce is short-lived when Bruce knocks Andrea to the floor and he pins her down. It was at this moment that she fell in love with Bruce.

He is internally conflicted by his desire to lead a normal life with Andrea and keep the promise he made to his murdered parents to fight crime.

He finally decides to abandon crime-fighting, instead pledging part of his inheritance to the Gotham City Police Department, so he can marry Andrea. After Bruce proposes to her at his estate, she gladly accepts.

Seconds later, bats fly out of the nearby cave that would later become the Batcave.

Andrea is forced to break off the engagement and move to Europe when she learns that her father has double-crossed the Mafia.

Carl Beaumont set up dummy corporations for some of the most powerful mob bosses in Gotham, including Chuckie Sol, Sal Valestra and Buzz Bronski.

When they learn that Beaumont has embezzled from them, they demand immediate repayment.

Unable to quickly access the money he had stolen and subsequently invested, Carl flees with Andrea and eventually settles on the Mediterranean coast.

By then, he has parlayed the money he'd stolen into a sizable fortune. However, when Beaumont's father refuses to make donations to Arthur Reeves, a politician formerly in his employ, the young politician sells information on the Beaumonts' whereabouts to the mob.

Although Carl has repaid them, the vengeful gangsters want "interest compounded in blood" and plan to use the information to have him killed. They send their hitman Jack Napier (who would later become the Joker) to kill Carl Beaumont.

Andrea encounters Napier as he leaves her villa and discovers her murdered father only seconds afterward.

Consumed with hatred, Andrea waits patiently for 10 years, planning the demise of the men who destroyed her happiness.

When she returns to Gotham, she dons a costume reminiscent of the Grim Reaper, complete with a smoke-generating device and scythe-bladed gauntlet.

Disguised and mistaken by everyone as Batman, she kills Sol and Bronski. After Bronski's death, she learns that Batman is Bruce Wayne.

Batman quickly discovers the link between the mobsters and Carl Beaumont and questions Andrea, but she rebuffs him.

When the Phantasm attempts to kill Valestra, she nearly falls into a trap laid by the Joker which she escapes.

Batman attempts to apprehend her as she flees from Valestra's residence, although she easily evades him and the police. When Andrea realizes that the police will arrest Bruce in her stead, she quickly changes out of her costume and helps him elude the authorities.

In a final attempt to conceal her identity, Andrea tells Bruce that the Phantasm is her father and that she has returned to stop his murderous rampage.

The two then spend the night together. Batman opens Andrea's locket while searching her apartment and after surviving a bomb sent by the Joker, he realizes that she is the Phantasm.

Andrea tracks the Joker to his hideout at the derelict Gotham World Fairgrounds, but the Clown Prince of Crime has deduced her identity and is ready for her attack.

The two fight hand-to-hand in the "Home of the Future" exhibit before he lures Andrea to a giant turbine.

He attempts to kill her by sucking her into it, but Batman intervenes, breaking the machine moments before its blades would have crushed her.

Andrea attempts to justify her actions. She asks him to let her carry out her vendetta without interference.

For once, completely helpless, Batman begs her to leave. Andrea agrees and disappears in a cloud of smoke. After a battle between the Dark Knight and the Joker, Andrea reappears to claim the defeated maniac.

As the fairgrounds explode, Andrea disappears with the Joker, with the latter laughing maniacally.

After escaping the inferno through a series of sewers, Batman assumes that Andrea and the Joker have perished in the blaze.

However, she survives and leaves a locket for Bruce in the Batcave as a keepsake. In the penultimate scene of the film, Andrea stands on the vespertine deck of an ocean liner, all alone. 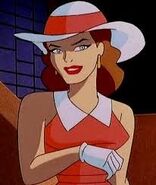 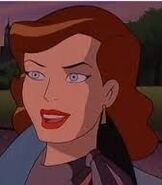 Andrea as The Phantasm
Add a photo to this gallery
Retrieved from "https://loveinterest.fandom.com/wiki/Andrea_Beaumont?oldid=73457"
Community content is available under CC-BY-SA unless otherwise noted.