Aliyah-Din is the main protagonist of Aliyah-Din and the Magic Lamp of Scooby Doo! in Arabian Nights. She is the long-lost princess of the kingdom of Serandibe who finds a magic lamp with the Genies Yogi Bear and Boo-Boo. She is also the main love interest of The Prince.

Aliyah-Din is kind, caring, considerate, brave, helpful, shy and overall pure of heart. Aliyah-Din is willing to help anyone in need as she happily accept to help Haman as he requested her to help seek the the Magic Lamp under the ruse it was to help heal the sick Sultan of Shiraz. Aliyah-Din displays a great love for the Prince as they both fell in love with one another the moment they met and similar to the Prince would go to great lengths to be with him as he would for her. Aliyah-Din is also friendly and loyal to her friends, thinking about their wellbeings aside from their own as she quickly became good friends with her Genies, Yogi Bear and Boo Boo. Aliyah-Din displays great intelligence and quick thinking, being abled to quickly free the Prince when he was chained in the dungeon and was able to regain the lamp without Haman noticing.

Aliyah-Din also has great faith in God as she prayed to be freed and rescued when she and the Prince were held captive by Haman and believed the Lord would somehow managed to guide her in their time of need. Aliyah-Din is also shown to fix any mistakes she caused as she used her new first wish upon retrieving the lamp for the world to be restored and confessed she "wished" to win the love and affections of the Prince, unaware he has always truly loved her since he first laid eyes on her. However, Aliyah-Din lacks confidence in herself, believing she could never be with the Prince, feeling she could never compete with any other girl or royal princesses. Aliyah-Din is also shown to be quite timid and shy as when she noticed she caught the attention of the Prince, she became frightened causing her to quickly leave.

Aliyah-Din was born the Princess and heir to the throne of the kingdom of Serandibe and upon her birth she was engaged to marry the Prince of the neighbouring kingdom of Shiraz. Although still a newborn, Aliyah-Din expressed great potential in someday becoming the Queen of her kingdom as well as the future wife of the Prince. Everyone was filled with joy and happiness to the occasion, but unknown to anyone, the Sultan's advisor Haman wanted to take over the kingdom of Shiraz and the first step to help him achieve his goal was to kidnap Princess Aliyah-Din to prevent the marriage between her and the Prince with no heir to the throne as a result. Haman managed to successfully kidnap Aliyah-Din and separated her from her family and home kingdom, abandoning her in the kingdom of Shiraz. Since then, Aliyah-Din grew up unaware of her true idenitiy as the Princess of Serandibe, believing herself to be an ordinary young girl.

Aliyah-Din and the Magic Lamp

Years later, Aliyah-Din has grown into a beautiful young woman and on one simple day as she is washing her clothes, she is unaware that she has won the love of the Prince of Shiraz who is watching her from the palace windows. Eventually, Aliyah-Din finally notices the Prince watching her and becomes frightened and quickly leaves, unaware she had accidentally left her scarf behind. The Prince is determined to find Aliyah-Din and goes into town to locate her. Meanwhile in his tower high in the palace, Haman summons the Lord of the Amulet to help him in the final stages of his plan to rule and conquer the kingdom of Shiraz. The Lord of the Amulet instructs Hamam in order to gain control of the kingdom, he must gain a magic lamp with a genie that is hidden away in a magic cave called The Tomb of Riches that is revealed every three years during a blue and will appear the next night. However, only a person pure of heart can enter the cave and the Lord of the Amulet instructs Haman to summon Aliyah-Din as she is pure of heart and thus is the only person capable of retrieving the lamp.

In her home, Aliyah-Din meets Haman as he requests her help to retrieve the lamp, but he lies to Aliyah-Din in order to gain her help, claiming the lamp has the power to heal the sick Sultan of the kingdom. Aliyah-Din accepts to help and promises to do whatever she can to help the Sultan. Haman is delighted and informs her to meet him later that night and again warns her the fate of the Sultan lies solely on her. However, later that night, Aliyah-Din is running late meeting with Haman and on her way to the meeting place, she comes across of Poster of the news regarding the Prince, learning he will choose a wife the following day. However, a young girl approaches Aliyah-Din and dissuades her beliefs that she could possibly win the love and heart of the Prince, believing Aliyah-Din is to common and a peasant to be with royalty, much to Aliyah-Din's sadness. Aliyah-Din continues to make her way, but suddenly meets the Prince who is delighted to have finally found her. Aliyah-Din attempts to leave to meet with Haman, but the Prince takes her hand and they share a romantic moment and immediately, Aliyah-Din falls in love with the Prince. However, remembering her promise to help Haman, Aliyah-Din is forced to leave the Prince.

The Prince is the deuteragonist of Aliyah-Din and the Magic Lamp and Aliyah-Din's main love interest. 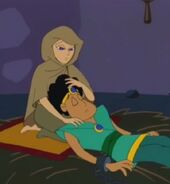 Retrieved from "https://loveinterest.fandom.com/wiki/Aliyah-Din?oldid=89781"
Community content is available under CC-BY-SA unless otherwise noted.